Samy Nasrallah has waited a long time for her opportunity to return to school.

Originally from Lebanon, she first visited Canada in 1993 before becoming a full-time resident in 1998 when she married her husband Joey and started their family in Liverpool.

She and Joey own and run a pizza restaurant and grocery store. They worked 17 hours per day before she decided to take a step back to give more time to her family. That ensured their children could take part in activities like hockey, basketball and more. 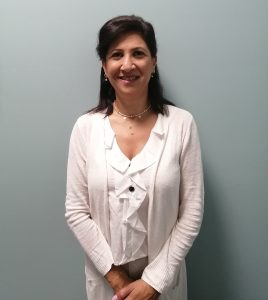 Nasrallah was drawn to Canada because of the large Lebanese population and her husband Joey was living here before they were married. At the time war was happening in Lebanon and many citizens were relocating to Canada.

“I was homesick for the first five to 10 years, but now I love Canada as much as I love Lebanon,” said Nasrallah.

In 2019 her family relocated to Hammonds Plains and she decided she wanted to do something different professionally when her family became less dependent on her.

“I’ve been here 30 years, I didn’t do anything in school, paperwork or anything yet,” said Nasrallah. “Only doing pizza.”

Her daughter suggested she visit a Nova Scotia Works office. She went there and discussed with them what her professional options were.

They first had her search for work, but she didn’t receive any phone calls for interviews. It was then suggested that Nasrallah return to school.

She decided on Maritime Business College after she met with an admissions representative who described the program to her and she liked what she heard.

Nasrallah also liked how the program is broken into three sections with separate semesters for business, administration and marketing.

“This is the perfect fit for me,” she said. “I’m always saying because I am 53 years old everything is challenging for me. I’m always talking to my classmates, my kids and they say mommy everyone has challenges, not just you.”

She has enjoyed learning from her instructor Marianne Peryer.

“She’s very strict, but at the same time she is very good,” she added. “She works hard with everybody to the point where you don’t need her.”

Her favourite part has been what she’s learned in the business side of the program.

“More the behaviours of the customers and how we deal with the people. I like the customer relationship more.”

After running her own business for so many years with her husband, when she’s in the classroom, she is always thinking about how they would advertise or solve other business problems in the past.

Nasrallah’s goal following graduation is to work in an office atmosphere like a bank or have the opportunity to work with numbers or sales representatives.

Peryer said that Nasrallah is an example of it never being too late to follow your dream.

She added her years of experience running her own business adds to the classroom environment.

“She can give examples that are true to life of what the others will experience when they go out into the workforce,” said Peryer.

“You can see she has this drive to overcome not only the fact that English is her second language, but she was behind the times in technology,” she said. “She just has this energy to succeed.”